If you have ever imagined going to Africa and hunting the rugged and amazingly wily Barbary Sheep, also called Aoudad Sheep, you no longer have to just dream. This exotic animal can now be hunted right in Texas, without all the expense of a worldwide safari. Many hunters consider the Aoudad Sheep one of the most challenging species to hunt, since they are very wary of people, extremely agile and athletic. Aoudads also have an amazing sense of vision that makes them tough to get close to. As if that wasn’t enough, these sheep have an incredible ability to scent danger in the area and require particular skill to get close enough to get off a shot.

The first Aoudad sheep were brought into the state of Texas in the early 1950s. Like most of the exotics now found in the state, the original Aoudads were brought in by private owners. The first recorded Barbary Sheep in Texas were in Llano and Kerr counties, but they quickly became a popular animal for game hunting on ranches all throughout the state, from the southern portion to the central portion.

Aoudads are a large, desert type of sheep that is native to the Chad and Barbary Coast of Africa, as well as the Atlas Mountains. In that part of the world, they are a very tough species, living up in the rugged and rocky areas. They manage to find food within areas with extremely sparse vegetation. Like the majority of the African mammals Aoudad sheep have a thick, dense coat that tends to blend into the environment. The body, as well as the neck, is a dusky, even reddish shade of brown, while the undersides are a lighter shade of the color. The rams and the ewes both have a beard. A fringe is also located on their throats, as well as under their tails. On males, the fringe is more marked, and it can also reach the lower section of their chests.

The amazingly thick and noticeable horns are impressive, and completely unmistakable as a perfect trophy mount. Males and females both possess horns that are triangular in shape, which are thick at the base of the skull, and then taper to a point like a cone at the tips. When rams mature, rings tend to form around their horns. With maturity, the rings go on to diminish, and eventually disappear. The horns curve backwards slightly to the outside, measuring anywhere from 30 to 34 inches on trophy rams. The horns of females do not tend to be as long. Nonetheless, they are an awesome spectacle.

A typical Aoudad sheep will have a body length measurement of just over 4 feet to up to 5 feet, shoulder height of 2 to just under 4 feet and a weight 65 to 320 pounds. Rams are significantly larger than females, so a ram is definitely what you want to be hunting for if you really want that trophy animal. Young Aoudad Sheep have a lean meat that is quite delicious!

Hunting Aoudad sheep is not for the faint at heart, or for the hunter who isn’t prepared to really work for a shot. These sheep are mostly active in the dusk and dawn hours. You therefore must wake up very early to hike through rough terrains in order to reach the greatest spots for hunting. Aoudad Sheep can be hunted by stalking or out of blinds overlooking feeders or game trails. Large caliber rifles are preferred to hunt trophy class Aoudad Sheep which are large rugged animals that try to head for almost impassable terrain when shot. If you don’t mind a bit of exercise and enjoy a genuine challenge, Aoudad hunting is right up your alley. 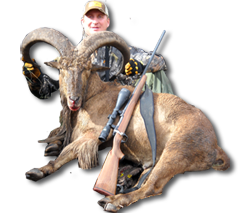 Email Us At Desert Safaris